IN THE CROSS OF CHRIST I GLORY,

THE WRECKS OF TIME

ALL THE LIGHT OF SACRED STORY,

THE CROSS IS A PAGAN SYMBOL ?

Jamie asked, and then went on to explain that it was an ancient Mayan symbol, far older than Christianity.

Why would Christians want to associate with that!

I agreed that it was a pagan symbol, but that it was also the means by which the pagan world, in the form of the Roman Empire, painfully executed  the lowest of criminals. A kind of torture designed to make would be felons or rebels think again and again and again about disobeying the laws of the state.

I further explained that the cross was special for Christians because Jesus Christ was executed upon one as a common criminal, the only man who never broke any laws, the least deserving to die, especially in this manner.

That He did so of His own free choice, as prophesied in the book of Psalms chapter 22, and Isaiah chapter 53.

That He did so in the place of everyone who will ever believe He is their one and only substitute, bearing the punishment their sin deserves, and conferring on them His perfect law keeping as His free gift.

That those who benefit thus might have their sin forgiven and be declared ‘not guilty’ – as if they were the ones who’d justly suffered and died.

Christians Rejoice in the symbol of an empty cross, as it reminds them of God’s amazing love, justice and mercy.

Whatever other cultures think of the cross, it is our God given symbol of Good News.

Good News - Christ died for sinners just like you.

The Apostle Paul Wrote These Words in his letter to the Galatians chapter 6 and verse 14:-

God forbid that I should boast except in the cross of our Lord Jesus Christ, by whom the world has been crucified to me, and I to the world.

WHO DO YOU SEE WHEN YOU LOOK AT A CROSS?

For the message of the cross is foolishness to those who are perishing, but to us who are being saved it is the power of God.

Please cast yourself upon the mercy of God, embrace the cross as what you deserve, and rest in His work on behalf of sinners, today!

“Blest Cross! blest Sepulchre! blest rather be the Man that there was put to shame for me!” John Bunyan

A BUSY AND PLEASANT DAY,

TRUE, IT WAS SUNNY AND WARM,

THAT MADE IT A DAY TO REMEMBER!

David from Cleckheaton was skeptical but listened and spoke as we discussed matters of eternal importance.

Should we just live for our career or that flashy fast car, if Jesus Christ arose from the dead [and He did], no man can safely set his aim so low!

Some one has come back from the dead, its time to listen, life lived just for this world alone is a life wasted. Someone else will get all your booty, and you will meet God without a Saviour.

If in this life only we have hope in Christ, we are of all men the most pitiable.

David took some excellent pictures of the locomotive and the station, its not every day you get to share the gospel with a capable photography student. 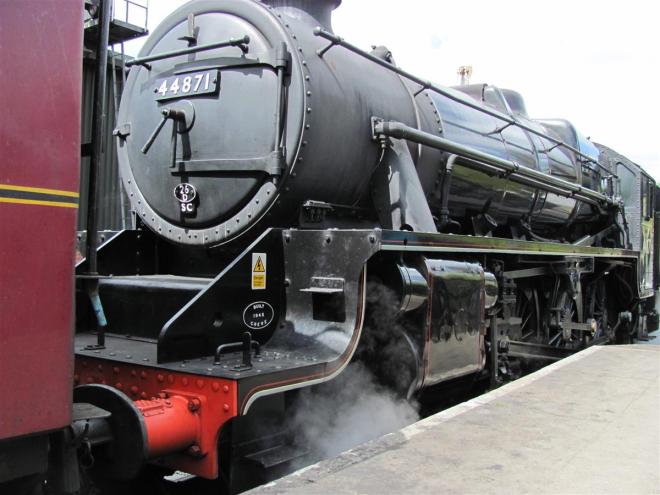 These marvelous engines prove the point, their original builders are probably long gone, these machines challenge everyone to ask where they are now!

“Enter by the narrow gate; for wide is the gate and broad is the way that leads to destruction, and there are many who go in by it.

Because narrow is the gate and difficult is the way which leads to life, and there are few who find it. “ 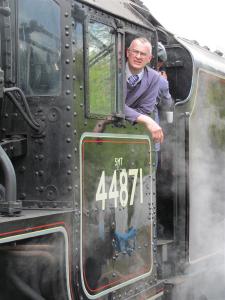 The Guard closes the door.

Larry thought we all go to the same place at the end of life’s journey, I was able to help him see there are two destinations for men, one to avoid [hell] and another to embrace [heaven].

The good news is that the Saviour God lived, died and arose from the dead to end all doubt.

Good News in the Market Place

John chapter 11 records Jesus’ words in verses 25 and 26, He asks an essential question:

Jesus said to her, “I am the resurrection and the life. He who believes in Me, though he may die, he shall live.

And whoever lives and believes in Me shall never die. Do you believe this?”

A COLD DAY IN PICKERING

The hottest spot in town today.

“WHAT IS IT? RELIGIOUS RUBBISH?”

He’s just walked past the table, in too much of a hurry to stop and see for himself.

“IT’S DEFINITELY NOT RUBBISH“ – PAUSE – “ALL RELIGION IS RUBBISH! “

Such was the limit of conversation today, there are few people about and those who are, are in a rush to get back ‘in’ somewhere. 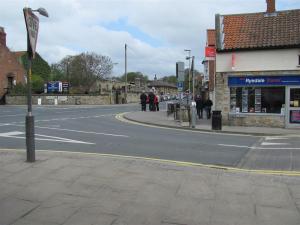 Where are all the People today?

No one outside drinking coffee today!

Laden with Light and Truth.

The God of Grace, Mercy and Peace, extends His hand to all who will take it through His Word.

As The Good Shepherd, He seeks and saves those who are lost, they hear His voice and follow Him.

“What man of you, having a hundred sheep, if he loses one of them, does not leave the ninety-nine in the wilderness, and go after the one which is lost until he finds it?
And when he has found it, he lays it on his shoulders, rejoicing.
And when he comes home, he calls together his friends and neighbors, saying to them, ‘Rejoice with me, for I have found my sheep which was lost!’
I say to you that likewise there will be more joy in heaven over one sinner who repents than over ninety-nine just persons who need no repentance.

John Chapter 10 and verses 27 and 28 also record Jesus saying this:

My sheep hear My voice, and I know them, and they follow Me.
And I give them eternal life, and they shall never perish; neither shall anyone snatch them out of My hand.

GOOD NEWS? Yes if you KNOW you are a LOST sheep.

Unfortunately modern man has been indoctrinated to believe he is not LOST and that there is no SHEPHERD and they don’t need to be rescued.

The Saviour Shepherd calls into the wilderness of this world to deliver all who will hear and believe His word – can you hear Him?

No!! Then you truly are lost with no means to find your way home – May God through His word, lift the darkness from your mind by shining the GOOD NEWS into you!

2 Corinthians chapter 4 and verses 5 and 6, explain why we go out into the Market Place with Good News

For we do not preach ourselves, but Christ Jesus the Lord, and ourselves your bondservants for Jesus’ sake.
For it is the God who commanded light to shine out of darkness, who has shone in our hearts to give the light of the knowledge of the glory of God in the face of Jesus Christ.

THE ‘GOOD NEWS’ SAYS – YOU CAN ALSO  BE SAVED – THE SHEPHERD CALLS – LIGHT BREAKS IN – THE LOST SEE THE WAY HOME.

Everything here tells you about Him.

ESPECIALLY WHEN YOU CONSIDER YOUR NEED AND HIS GREAT POWER TO SAVE.

We spoke with two people in particular today, George and Jamie, widely different in ages, but with the same basic need, to be saved by Jesus. 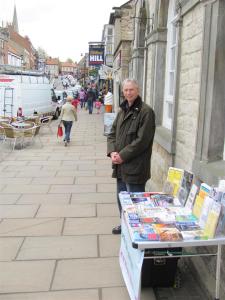 Graham, ready to speak about Jesus

George, a man in his 80’s told us he was a Christadelphian.

His hope of being accepted by God on the last day depended on his knowledge of the Bible and  his own efforts to comply with its teachings.

Yet he’d clearly missed the parts where we are told that our best efforts are as ‘filthy rags’ [Isaiah 64:6]  before God, i.e. offensive and only fit for the  trash.

And the part where forgiveness is God’s free gift to all who look away from themselves to the work Jesus Christ accomplished by dying as a substitute for sinners on Calvary.

5 not by works of righteousness which we have done, but according to His mercy He saved us, through the washing of regeneration and renewing of the Holy Spirit,

6 whom He poured out on us abundantly through Jesus Christ our Saviour,

7 that having been justified by His grace we should become heirs according to the hope of eternal life.

Jamie, a lad of just 18 and under the influence of alcohol, stood to speak for a while, liberated from natural inhibitions he repeated said that ‘He wished he could believe there was someone watching over us‘.

I was able to assure him there is indeed One who sees all and cares for His people.

13 The LORD looks from heaven;
He sees all the sons of men.
14 From the place of His dwelling He looks
On all the inhabitants of the earth;

5 Then the LORD saw that the wickedness of man was great in the earth, and that every intent of the thoughts of his heart was only evil continually.

Then to tell him of the Saviour God who came to deliver man from His righteous judgement, by becoming a substitute for sinful man.

18 Now all things are of God, who has reconciled us to Himself through Jesus Christ, and has given us the ministry of reconciliation,

19 that is, that God was in Christ reconciling the world to Himself, not imputing their trespasses to them, and has committed to us the word of reconciliation.

20 Now then, we are ambassadors for Christ, as though God were pleading through us: we implore you on Christ’s behalf, be reconciled to God.

21 For He made Him who knew no sin to be sin for us, that we might become the righteousness of God in Him. 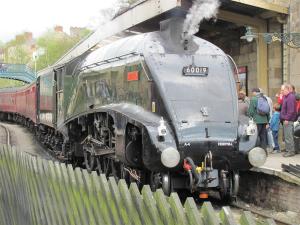