MANY HAVE COME TO PARTICIPATE AND AS MANY COME TO WATCH.

A selection of the day.

‘PEACE IN OUR TIME’.

Give us peace in our time, O Lord.

Over 700 leaflets were distributed, and so many people stopped to talk there’s not enough room to tell about them all.

Three examples will need to suffice:

The first lady saw the reference to peace and  thought we were Quakers!

I had the privilege of speaking with here about the One and only Saviour and Peace Maker, Jesus Christ.

Therefore, since we have been justified through faith, we have peace with God through our Lord Jesus Christ.

You know the message God sent to the people of Israel, telling the good news of peace through Jesus Christ, who is Lord of all.

Man’s peace is just the absence of war, God’s peace is present and permanent, the kind for which  everyone is looking! You find it when you find Him!

The Second Was A Young Man, mid Twenties, Who’d never read anything from the Bible!

He gladly took away copies of booklets, but most especially, Luke’s Gospel, written to give a factual account of Jesus life, death and resurrection to a Roman Official called Theophilus.

Therefore, since I myself have carefully investigated everything from the beginning, it seemed good also to me to write an orderly account for you, most excellent Theophilus, so that you may know the certainty of the things you have been taught.

Christianity is based on evidence, not emotion or imagination, within a few years of His death and resurrection Godly men like Luke checked and recorded the details.

The Third was a mature lady who boasted of being an Atheist.

I briefly challenged her with the statement that “It’s illogical to be an atheist as no mere human could ever prove the non existence of God, and that He might just be where she hadn’t looked. At best you can be an agnostic, because you just don’t know”.

She went on to tell me that she’d been a Sunday School teacher but now rejected all she’d taught!

How is this possible? Because liberal teaching has robbed many Christians of confidence in God’s Word, and modern society says you can’t be definite about anything.

I’m glad to say she left with something to read, I pray that the Lord has graciously revealed Himself to her in salvation.

Psalm 14 verse 1 doesn’t mince it’s words regarding those who reject the existence of God:

The fool says in his heart,  “There is no God.”

If you’ve read this far please don’t waste any more time in the muddle of modern times,

Seek God until you find Him and He delivers you from the shackles of sin, listen to Jesus:

“Come to me, all you who are weary and burdened, and I will give you rest. “

So one young man said after a discussion about heaven.

“I thought everyone went to heaven, but you are saying this isn’t the case!”
“Actually, I definitely said the words, but they were taken from the Bible.”

Especially the words of Jesus recorded by John in his gospel, chapter 14 and verse 6:

Jesus said to him, “I am the way, and the truth, and the life. No one comes to the Father except through me.

“there is salvation in no one else, for there is no other name under heaven given among men by which we must be saved.”

It all began with a discussion of John Blanchard’s booklet ‘Ultimate Questions’.

“Life is full of questions. Some are trivial, some more serious – and some tremendously important.

Even as you read these words you may have questions about your health, your financial situation, your job, your family or your future.

But the greatest, the ultimate questions, are about God and your relationship to Him. Nothing in life is more important than this. Good health, financial stability, secure employment, a contented family and a hopeful future are all things that people want.

Yet even these are temporary and eventually pointless unless you have a living relationship with God, one that is clear and certain – and will last forever.

In the following pages you will discover why such a relationship is so urgently needed – and how it is possible.

The questions that follow are the most serious and important that anyone could ask. The answers are those everyone needs!

The young man and his lady friend had almost walked past, refusing the leaflet offered them, but an inquiry asking whether he believed in God caused him to stop.

He’d been raised to attend Church, even sung in the choir, but had never heard that he was a sinner, unfit and unready to meet his Maker.

We concluded that he was a ‘cultural christian’ rather than a ‘true Christian’, he’d never been ‘born again’, didn’t think he had sins that needed to be forgiven before he would find a welcome from the Almighty.

Unusual in that he had some knowledge of Christianity, he was very typical of those who are deluded into thinking God could turn a blind eye to sin.

Our discussion turned to the matter of ‘lying’, he readily confessed he’d lied and protested that everyone did, surely God realises this and will turn a blind eye!

I carefully set out to explain that ‘God has no blind eyes’, that He sees and records every detail of every  life, and I made it clear that He says there are/ will be no ‘liars’ in heaven.

But the cowardly, the unbelieving, the vile, the murderers, the sexually immoral, those who practice magic arts, the idolaters and all liars—their place will be in the fiery lake of burning sulfur. This is the second death.”

I pressed upon him their urgent need to flee to Jesus Christ, the ONLY SAVIOUR of sinners, the One Who died that people might escape the coming wrath of God.

John says it’s possible for all who will surrender to and believe in Jesus Christ, Chapter 3 and verse 36:

“Whoever believes in the Son has eternal life, but whoever rejects the Son will not see life, for God’s wrath remains on him”

If this is new to you, then its time you read John Blanchard’s booklet too, write to me and I’ll do my best to get you a copy. Alternatively you could just open your Bible at John’s Gospel and read the word’s of life for yourself.

Yes! But not the violent, dangerous,

the surface of the earth

and a cumulonimbus cloud.

England, an evolution of the LNER

Peppercorn Class A1 class, the first

such locomotive built in the

the last steam locomotive built by

British Railways, in 1960, it is capable 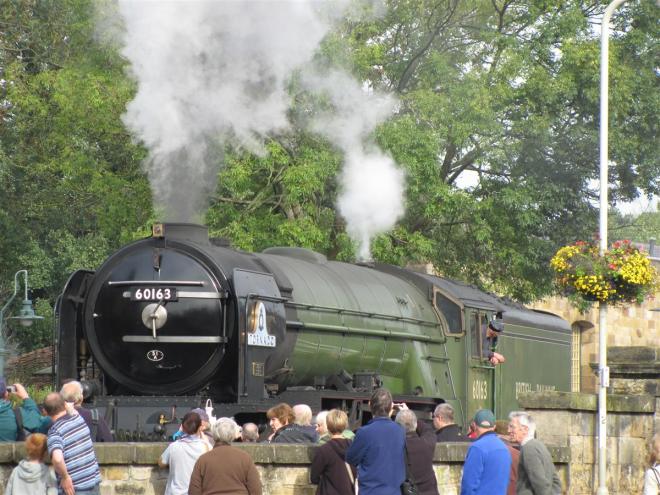 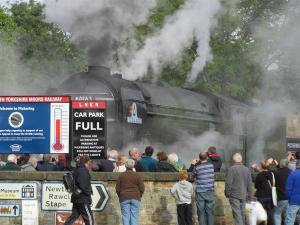 Tornado, waiting for points to change. 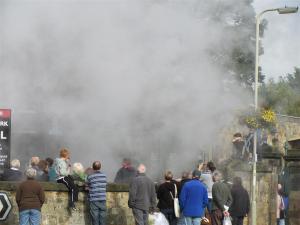 Lost in a cloud of steam

People certainly came to see it,

drawn by the raw energy of

SPEAK OF THE GLORIOUS 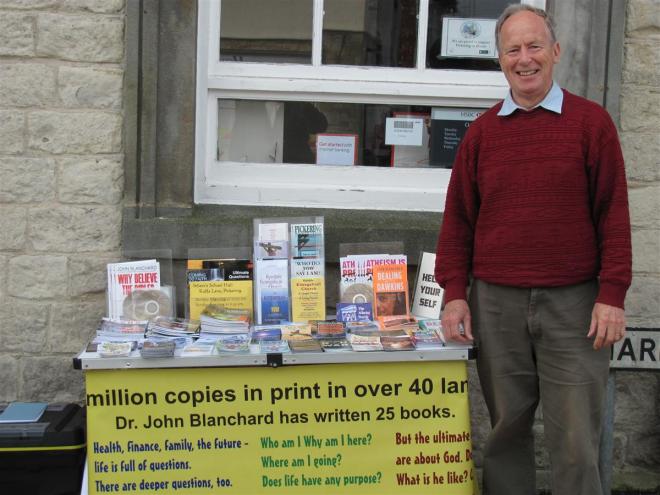 I spoke with one dear man

wrestling with the issue of

how a Good God could allow

Far from an academic discussion, he explained that he’d become an atheist after watching his dear father suffer for almost a year before actually passing away.

He explained that he’d searched for an answer in religion and cults but could only conclude that if there is a god he is very cruel, and thus had embrace the world view that there is no god, that people are just animals and when you are dead you are dead!

I spoke with Him about the reason for man’s suffering, explaining that life had not always been like this, that in fact our troubles are traced back to man’s initial rebellion against the One who made him.

17 Then to Adam He said, “Because you have heeded the voice of your wife, and have eaten from the tree of which I commanded you, saying, ‘You shall not eat of it’:“Cursed is the ground for your sake;In toil you shall eat of itAll the days of your life.

18 Both thorns and thistles it shall bring forth for you,

And you shall eat the herb of the field.

19 In the sweat of your face you shall eat bread

Till you return to the ground,

For out of it you were taken;

For dust you are,

And to dust you shall return.”

Further that God became a man to deliver both mankind and his environment from the  curse imposed to reveal sin.

Matthew chapter 16 and verse 21 is typical of the Bible’s record:

21 From that time Jesus began to show to His disciples that He must go to Jerusalem, and suffer many things from the elders and chief priests and scribes, and be killed, and be raised the third day.

Through His suffering, death and resurrection a change has begun which will conclude in a new World where there is no suffering.

The Book of Revelation, chapter 20 and verses 4 & 5 reveal this:

4 And God will wipe away every tear from their eyes; there shall be no more death, nor sorrow, nor crying. There shall be no more pain, for the former things have passed away.”5 Then He who sat on the throne said, “Behold, I make all things new.” And He said to me, “Write, for these words are true and faithful.”

Words which don’t take away the reality of human suffering, but they do explain it and give hope to all who will believe into Christ, including you!

Bridge to life - it's time you crossed!