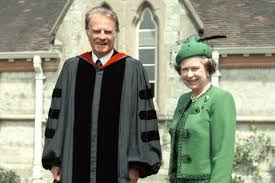 This article first appeared on Christian Today Like my colleague Joseph Hartropp, I love the Netflix drama The Crown. It’s big budget, beautifully produced and the dialogue and plot are West Wing sharp. None more so than in episode six of season two, which features the relationship between the young Queen Elizabeth and the American evangelist Billy Graham, on […]

via The Queen and Billy Graham — THE BLOG OF DAVID ROBERTSON