Another pleasant day in Pickering, our table is set up again with an invitation to hear some ‘GoodNews’. 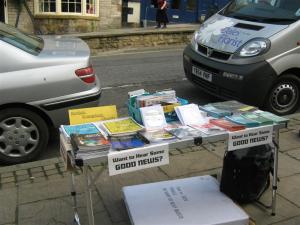 Table with invitation to hear some Good News

A very busy morning, from the moment we set up there was a man ready to talk!

Then the flow of people just kept coming. Mainly tourists like the couple who had a JW background. Then there was the Woman from the bank who’d never taken time to see the need to be ready to meet God.  We were encouraged by the lady from St Albans who assured us she was in a Church where the gospel of Jesus Christ is preached each week.

Three local people stick in mind, the eighteen year old who said she didn’t want to answer the question ‘are you a good person’ because she knew she wasn’t but didn’t want to change. The man from Rosedale who listened and took away a John’s gospel. And the man who said he’d been a Roman Catholic for 80 years but saw no need to consider the claims of Christ. The time flew today, there were so many people to speak with.

Nick managed to give a leaflet to the local vicar, but he didn’t stop to talk!

One final person sticks in mind, the lady who told us she had a degree in religious studies and that we insulted her by asking if she had been born again!!!!! We are sorry that you found the gospel offensive and pray that you will come to thank God for the day you met us.

No Outreach today – rained off!

This evening we considered the last section of Matthew 25, under the title ‘Judgement is past’.  I took time to point out that there is an immediate distinction presented between sheep and goats, believers and unbelievers. Then showed that there is no judgement of sin for believers at this time as Christ took it on Calvary, but that there is an evaluation of their service, prior to entering in to the eternal joy of fellowship and communion with God.

This morning’s sermon was about Jesus calling out His first 5 followers. Each resulted in a commitment to be in fellowship with him, but each came in a different way. The Saviour is also acknowledged as Saviour, Messiah and King.

35 Again, the next day, John stood with two of his disciples.
36 And looking at Jesus as He walked, he said, “Behold the Lamb of God!”
37 ¶ The two disciples heard him speak, and they followed Jesus.
38 Then Jesus turned, and seeing them following, said to them, “What do you seek? ” They said to Him, “Rabbi” (which is to say, when translated, Teacher), “where are You staying?”
39 He said to them, “Come and see.” They came and saw where He was staying, and remained with Him that day (now it was about the tenth hour).
40 One of the two who heard John speak, and followed Him, was Andrew, Simon Peter’s brother.
41 He first found his own brother Simon, and said to him, “We have found the Messiah” (which is translated, the Christ).
42 And he brought him to Jesus. Now when Jesus looked at him, He said, “You are Simon the son of Jonah. You shall be called Cephas” (which is translated, A Stone).
43 ¶ The following day Jesus wanted to go to Galilee, and He found Philip and said to him, “Follow Me.”
44 Now Philip was from Bethsaida, the city of Andrew and Peter.
45 Philip found Nathanael and said to him, “We have found Him of whom Moses in the law, and also the prophets, wrote—Jesus of Nazareth, the son of Joseph.”
46 And Nathanael said to him, “Can anything good come out of Nazareth?” Philip said to him, “Come and see.”
47 Jesus saw Nathanael coming toward Him, and said of him, “Behold, an Israelite indeed, in whom is no deceit!”
48 Nathanael said to Him, “How do You know me?” Jesus answered and said to him, “Before Philip called you, when you were under the fig tree, I saw you.”
49 Nathanael answered and said to Him, “Rabbi, You are the Son of God! You are the King of Israel!”
50 Jesus answered and said to him, “Because I said to you, ‘I saw you under the fig tree,’ do you believe? You will see greater things than these.”
51 And He said to him, “Most assuredly, I say to you, hereafter you shall see heaven open, and the angels of God ascending and descending upon the Son of Man.”

Another remarkablely dry and warm Friday.

We were out in the town centre again passing out leaflets and engaging people in conversation.

One lady at least read the ‘Do you know Jesus Christ’ leaflet and took a copy of Ultimate Questions away with her.

I spoke with a young man from Palestine but his English was poor and so conversation was limited, he did take a leaflet away. A young man from Iran stopped to talk for a bit, he’s quite friendly and says he reads the New Testament we gave him. 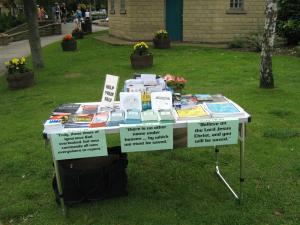 The summer tourists seem to be thinning out, but many read and took away the gospel as a result of our testimony today. 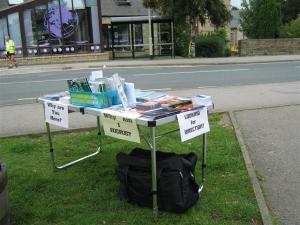