“no, I believe in science”,

“so do I, have this book

And off he vanished

WE LIVE IN DAYS WHERE MINDS ARE CLOSED,

THINKING AND REASONING HAVE BEEN RETIRED!

Neutered By The Concept of Evolution!

Mesmerised by the flashing light of a television screen, millions have embraced ‘the lie’ that we are self made and therefore have no God to whom we must answer.

The coming of the lawless one is according to the working of Satan, with all power, signs, and lying wonders, and with all unrighteous deception among those who perish, because they did not receive the love of the truth, that they might be saved. And for this reason God will send them strong delusion, that they should believe the lie, that they all may be condemned who did not believe the truth but had pleasure in unrighteousness.

But even if our gospel is veiled, it is veiled to those who are perishing, whose minds the god of this age has blinded, who do not believe, lest the light of the gospel of the glory of Christ, who is the image of God, should shine on them. 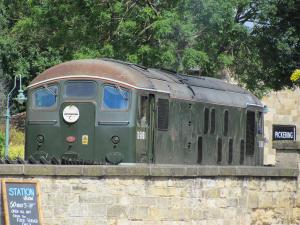 Somebody's handiwork! Designed and Made.

An earlier model, but still designed and made.

That anyone would suggest that powerful, complex machines like these made themselves would be considered ridiculous.

Likewise, to suggest that our finely balanced world and its amazing inhabitants are the results of an accident of time, should also be relegated to fiction.

SCIENCE is  the study of WHAT exists, and HOW it works, it cannot answer WHY things exist, WHY we are here, WHAT is the point of being alive! It cannot explain the Origin of Life, where the world came from, or what life is all about.

Dawkins says ‘We are all descended from what might have been something like bacteria” [Dealing with Dawkins, John Blanchard, EP, page 14]

“It is absolutely safe to say that if you meet somebody who claims not to believe in evolution, that person is ignorant, stupid or insane (or wicked, but I’d rather not consider that). [New York Times, 9th April 1989]  as quoted in ‘Dealing with Dawkins’, by John Blanchard, EP, on page 14.

When asked ‘What do you believe is true even though you cannot prove it?’ Dawkins replied: ‘I believe that all life, all intelligence, all creativity and all “design” anywhere in the universe, is the direct or indirect product of Darwinian natural selection’ [Dealing with Dawkins, John Blanchard, EP, page 21]

THESE ARE NOT ‘SCIENTIFIC STATEMENTS’, BUT, RATHER THE DOGMA OF THE BELIEF SYSTEM CALLED ATHEISM!

David Robertson summed up Dawkins ‘ position when he told him: “Your view, that the universe is only physical, is a hypothesis andone that is largely based on wishful thinking. In fact, your position is a kind of ‘science of the gaps'”. [David Robertson, The Dawkins Letters, Christian Focus Publications, page 30] quoted in Dealing with Dawkins, John Blanchard, EP, on pages 21,22.

PERHAPS IT’S TIME YOU RETURNED TO THE ONLY RELIABLE SOURCE OF THE WORLD’S ORIGINS, MAN’S ORIGIN AND PURPOSE – THE BIBLE.

Just ask and we will make all that the Bible says available to you. 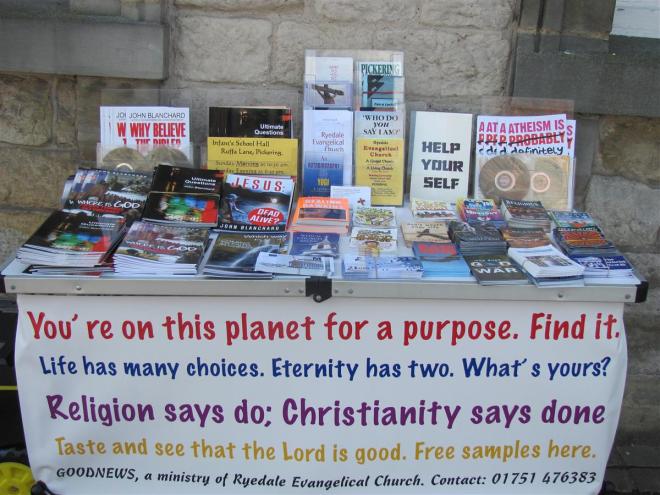 unless one is born again,

the kingdom of God.”

the kingdom of God.

Jesus words, not mine!

Spoken to a religious expert, they underscore the need for a supernatural gift of life before anyone can ‘see’ God’s world, never mind enter it!

The weather was poor on Saturday, but I did manage to set up the table for 45 minutes before the rain fell. I spent all of that time talking with two people who know a great deal about Christianity but have never seen the need to be born from above and have not therefore entered into the Kingdom of God.

The crying need of our generation is  a life giving work of the Holy Spirit, Oh that the Lord would do what He alone can do, give light to the blind and life to the dead.

The message of salvation is regeneration—not reformation. Paul says, “If any man be in Christ, he is a new creation” (2 Cor. 5:17). The new birth is not an overhaul of the “old wreck,” or a new paint job. The old Adamic nature is so incorrigibly corrupt that even God will not attempt to fix it up. He insists on completely rejecting the old hulk and making a new man. Jesus said to Nicodemus, “That which is born of the flesh is flesh; and that which is born of the Spirit is spirit. Marvel not that I said unto you, You must be born again’“ (John 3:6, 7).
The old nature received at birth is hopeless, and dressing it up with education and culture only makes it more dangerous than before. The more we work on the “old man,” the more deceptive it becomes. Do you know why the sinner must be born anew? Because he was born all wrong the first time. He doesn’t have to be taught to go his own way—it comes naturally to him. But by the new birth he is turned around and headed in the right direction!
Spurgeon told of a missionary who visited a primitive hut and became nauseated by the filthy floor on which he had to sit. He suggested to his host that they scrub the dirty surface with soap and water, but the man replied, “the floor is just clay—packed down and dry. Add water and it turns to mud. The more you try to wash it, the worse the mess becomes!” Yes, the hut needed something besides an earthen floor. So it is with the human heart: it is hard and dirty, and nothing will help it. Man needs a new heart. He must be born again from above!

A NUMBER OF PEOPLE STOPPED BRIEFLY TO TALK TODAY.

One young woman browsed the table and lifted the leaflet, ‘Are you good enough to go to heaven?’.

I asked whether she’d like to know the answer before she read it, she smiled and nodded, so I said the answer was ‘no’!

I could see the surprise in her face, like so many she’d probably assumed that while not perfect she’s somehow ‘good enough’.

“I’ll take it home and read it” were her parting words, I pray she has and that the Lord has used it for her salvation.

Jesus’ words in Matthew chapter 5 and verse 20 make clear the need for a high standard of ‘righteousness’.

“For I say to you, that unless your righteousness exceeds the righteousness of the scribes and Pharisees, you will by no means enter the kingdom of heaven. ”

As it is written: “There is none righteous, no, not one;

Psalm 116 and verse 5 tells us that God is ‘righteous’

Gracious is the LORD, and righteous; Yes, our God is merciful.

Those who would enjoy his heaven must be righteous before they arrive, they can’t change themselves and therefore need a Saviour.

Jesus Christ is the only one who can make people righteous and therefore fit to live forever in the presence of our righteous God.

The Apostle Paul explained the process in 2 Corinthians chapter 5 and verse 21:

For He made Him who knew no sin to be sin for us, that we might become the righteousness of God in Him.

The word “righteous” goes back to a base, reg, meaning “move in a straight line.” Thus, “righteous” (rightwise) means “in the straight (or right) way.” Used with reference to morality, “righteous” means living or acting in the right way.
But what is the “right” way? In our society, people commonly say that everyone must determine what is right for oneself. However, Scripture offers a different standard—indeed, the ultimate standard of rightness or “righteousness,” God Himself. God’s character reveals what is absolutely right. He is the measure of moral right and wrong.
He is also the source of right living. It’s important to understand that righteousness involves more than just determining whether or not one has lived up to the perfect standard that God sets. The fact is, no one has except Jesus (Rom. 3:23; 5:18–21). Thus, in a legal sense, all of us stand guilty before God. We are all “unrighteous.” We have all “sinned” (literally, “missed the mark”).
But the message of Romans is that God has done and is doing everything that needs to be done to restore things to the way He originally intended—to the right way. For example, He dealt with sin through Jesus’ death on the cross (5:6–11), and He transfers the righteousness of Christ to those who trust in Him (5:1–2). As believers, we can enjoy a restored relationship with God.

The gospel, then, is “good news” because it reveals God’s right way. It tells us that He is a good God who, in love and mercy, has done something about the wrong way that the world has taken. How have you responded to that good news of God’s righteousness?

Among the Greeks, righteousness was an ethical virtue. Among the Hebrews it was a legal concept; the righteous man was the one who got the verdict of acceptability when tried at the bar of God’s justice. Christ’s death took away our sins and made it possible for sinners to have “the righteousness of God,” i.e., right standing before God (Rom. 1:16–17; 3:22; 5:17). That gift of righteousness is to be followed by upright living (Rom. 6:13–14). 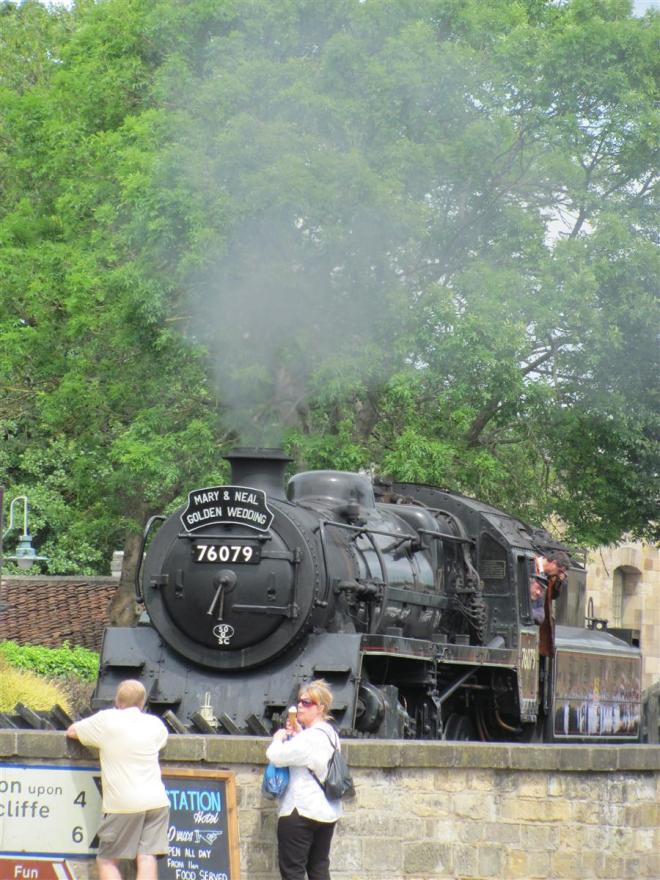 WHY IS IT THAT

We spoke with a young man today who believed that God had sent their group a prophet who, though he died in 1965, was God’s channel to bring revelation over and above the Bible!

Don’t be too hard on him, we had some very searching dialogue, especially concerning his ‘hope’ of being welcomed by God on the last day, the need to have his sins forgiven beforehand and to embrace Jesus Christ as the only appointed mediator between man and God.

But his willingness to surrender his God given responsibility seek and find God directly to the pontifications of a man or woman instead of adhering to the plain teaching of Scripture that Jesus Christ is to be know directly and personally as God’s final, One and Only Word, Saviour and Lord, is tragic.

In Acts chapter 17 verses 10 to 12 the Apostle Paul commends the Bereans for their careful examination of what they’d been told in the light of Scripture:

And in 2nd Timothy chapter 2 and verse 15 where he says:

YET TRAGICALLY MANY HAVE IGNORED HIS INSTRUCTIONS AND FALLEN FOUL OF DELUDED PEOPLE.

My young friend was trapped in a world where William Branham’s teachings were more important than those of Jesus Christ!

The pattern has repeated itself in every age, its effects found in corruptions of Christianity like Romanism, Russellites, Mormons and religions like Buddhism, Islam and Mysticism.

LET ME BE VERY DIRECT, YOUR SOUL IS AT STAKE!

There is a hell to shun and a heaven to enjoy, Jesus Christ is the only one in all time and space who can deliver you from the first and give you entrance to the latter. Abandon listening to mere men and hear God speak that you might be delivered from sin and its consequences. 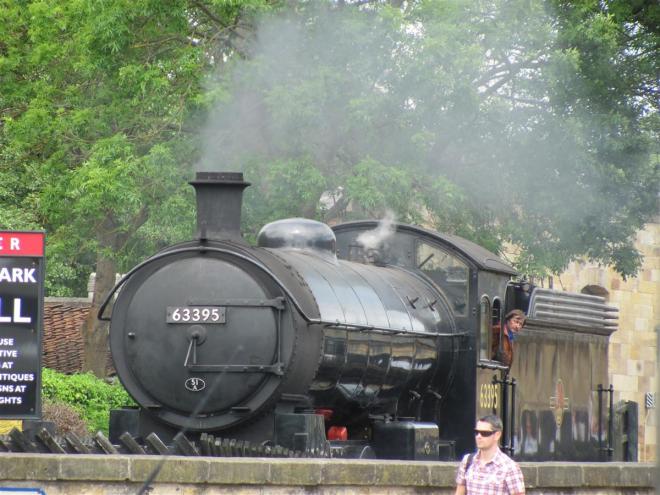