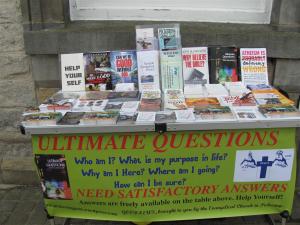 More than half a dozen people stopped to talk, I’m always grateful to those Christians who want to encourage me  in my efforts to bear witness for the Lord.

The one who has left me thinking though, is the lady who cheerfully described herself as a ‘Pagan’!

She told me she believed in the ‘spiritual’ and that Jesus was the source of her morals, and left!

WHAT IS A PAGAN?

Wikipedia [where else would you look?] defines ‘pagan’ as:

Contemporary Paganism, or Neopaganism, includes reconstructed religions such as Hellenic polytheism, Celtic or Germanic reconstructionism as well as modern eclectic traditions such as Discordianism, or Wicca and its many offshoots.Many of the “revivals”, Wicca and Neo-druidism in particular, have their roots in 19th century Romanticism and retain noticeable elements of occultism or theosophy that were current then, setting them apart from historical rural (paganus) folk religion.

One ‘Pagan’ web site advertises itself as:

Your one stop spot for information relating to God and/or Goddess Worship in all its many forms…  Celtic, Druid, Egyptian, Greek, Magical Traditions, Eastern, Native American, Norse Heathen, Roman, Santeria, Wicca, WitchCraft {Craft of the Wise} and other Earth Centered and Nature Based Religious Faiths.

The Holman Illustrated Bible Dictionary describes them as:

Those who worship a god or gods other than the living God to whom the Bible witnesses.

Those religions which Christianity replaced, having demonstrated itself to be the only true revelation of the Supreme Being to mankind.

The delusions Satan uses to keep people trapped in sin and condemned to hell!

When the Pagan world of the New Testament was challenged by the Good News Of Jesus Christ’s Life, death and resurrection, Paganism crumbled before it.

Also, many of those who had practiced magic brought their books together and burned them in the sight of all.

Paganism Flourishes Today Because The Gospel has Been Distorted,  Misrepresented, and Ignored.

The ‘light’ has gone out and darkness rules the land.

THE GOSPEL LIGHT SHINES TO GIVE HOPE TO THOSE EMBROILED IN PAGAN DARKNESS.

Jesus spoke to them again, saying, “I am the light of the world. He who follows Me shall not walk in darkness, but have the light of life.”

I have come as a light into the world, that whoever believes in Me should not abide in darkness.

Jesus’ Sacrifice Established Forever That There Is Only One God, and Only One Way To Be One With God –

Ancient paganism thought of each god as bound to his worshippers by self-interest because he depended on their service and gifts for his welfare. Modern paganism has at the back of its mind a similar feeling that God is somehow obligated to love and help us, even though we don’t deserve it. This was the feeling voiced by the French freethinker who died muttering, “God will forgive—that’s his job.” But this feeling is not well founded. The God of the Bible does not depend on his human creatures for his well-being (see Ps. 50:8–13; Acts 17:25), nor, now that we have sinned, is he bound to show us favor. We can only claim from his justice—and justice, for us, means certain condemnation.
God does not owe it to anyone to stop justice from taking its course. He is not obligated to pity and pardon; if he does so it is an act done, as we say, “of his own free will,” and nobody forces his hand. “It depends not upon man’s will or exertion, but upon God’s mercy” (Rom. 9:16). Grace is free because it is self-originated and proceeds from the One who was free not to be gracious. Only when one realizes that what decides each man’s destiny is whether or not God resolves to save him from his sins, and that this is a decision which God need not make in any single case, can one begin to grasp the biblical view of grace.
Your Father Loves You by James Packer, (Harold Shaw Publishers, 1986), page for May 4