“HOW COULD WE MANAGE WITHOUT HIM?”

The new banner round the table prompted one lady to say.

She understood what the vast majority miss.

The Christian faith stands or falls on whether Jesus Christ actually rose from the dead.

And if Christ is not risen, your faith is futile; you are still in your sins!

If in this life only we have hope in Christ, we are of all men the most pitiable.

But now Christ is risen from the dead, and has become the firstfruits of those who have fallen asleep.

Meeting the risen Christ transformed His followers from cowards to champions, fearless and ready to stand fast no matter the cost.

These followers of the risen Christ turned the world upside down, spreading the Good News to the four corners of the planet in just 2000 years.

MEN HAVE SOUGHT TO DISPROVE IT AND BEEN CONVERTED INTO BELIEVERS IN THE PROCESS.

THE RAILWAY IS INTERESTING, PICKERING IS A PLEASANT PLACE TO HAVE LUNCH.

Theres always something to see and discuss. 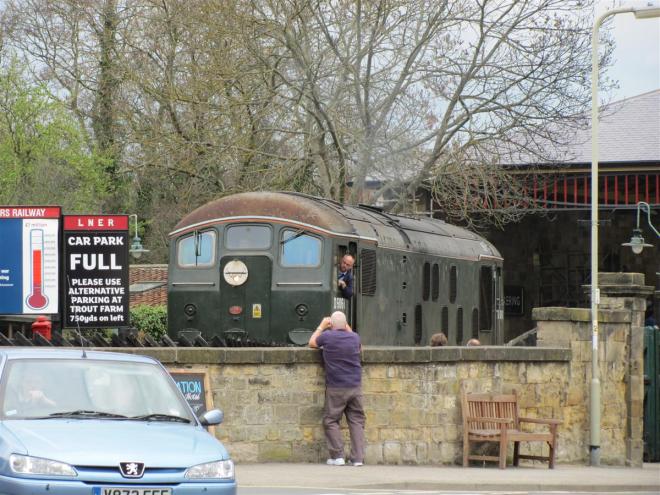 Occasionally, even a Diesel loco at which to look.

The Good News of Jesus’ Resurrection precedes both and will still be enjoyed when both have ceased to exist.

Winston Churchill arranged his own funeral. There were stately hymns in St. Paul’s Cathedral and an impressive liturgy. When they said the benediction, he had arranged for a bugler high in the dome of St. Paul’s Cathedral on one side to play “Taps,” the universal signal that the day is over. But when that was finished, there was a long pause and then a bugler on the other side played “Reveille,” the signal of a new day beginning. It was Churchill’s way of communicating that while we say “Good night” here, it’s “Good morning” up there!
Jesus Christ said, “I am the resurrection, and the life; he that believes in me, though he were dead, yet shall he live” (John 11:25). When a man steps out of his own grave, he is anything that he says that he is and he can do anything that he says he can do!